Somewhere in August I got a invitation of Tesla to come over to the factory in Fremont California and see the Model S in person.

As a reservation holder of a Model S I simply could not refuse that invitation! Lucky me I still had some business to do in California and I had a paintball tournament there, a bit of travelling through the USA and I could attend the event, yay!

I did not know what to expect, but I expected something big. Tesla is not investing in any form of promotion of their Model S, but they seem to solely rely on the product promoting itself and using modern techniques like Facebook and Twitter. I saw myself as a ‘messiah’ (Ok, that is dramatized!) for Tesla, they would rely on us to overload the world with Tweets and messages with Facebook. Tempting and convincing other people to also make a reservation for the Model S.

My colleague (The Roadster owner) and I stayed in San Francisco to check out the area but also to be close to Fremont!

Driving towards the factory we did not know what to expect. How big is the factory? How many Model S’es will there be? How long wil the test drive be? (I knew that I would not be driving myself).

Arriving at the factory is impressive, it’s HUGE! The first thing you see is the big T-E-S-L-A sign on the outer wall. 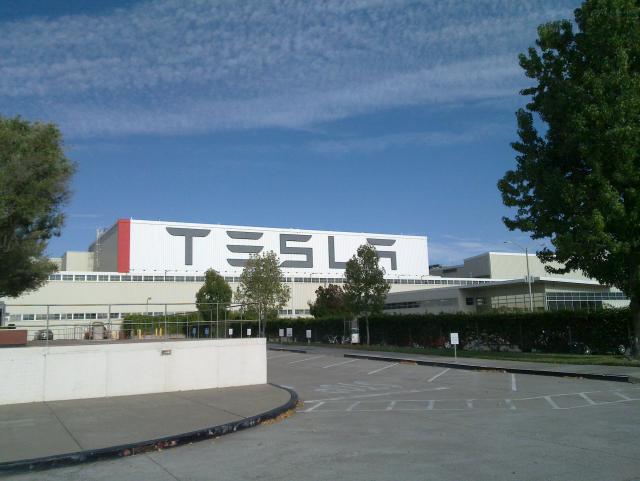 We parked the car and walked to the entry, have to say, that was the longest walk ever over a parking lot!

Once inside the first thing we saw was a clay model of the Model S, one half brown, the other one silver. 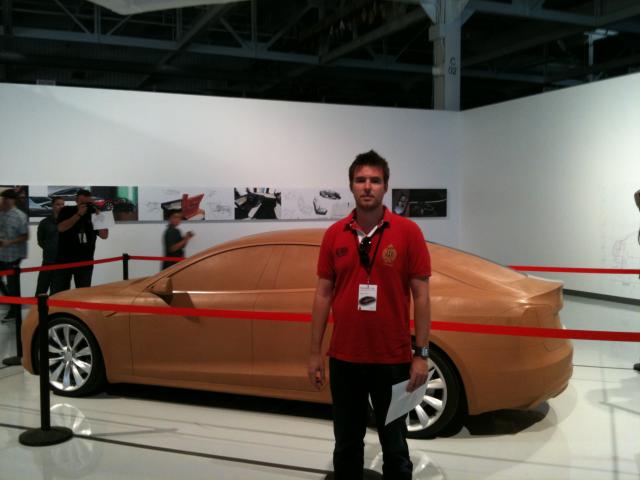 Seeing that model shows you how big the S is. At first Tesla said it would be the size of a BMW 5-series, well, it’s more like a 7-series!

Further down in the factory there was the ‘exploded body’ of the Model S and a chassis with battery and drive-train in it. This gave a good impression of the storage capacity the S has, but also how small the drivetrain actually is. I’ve seen it on multiple pictures, but seeing in for real is something different. A real piece of modern engineering! 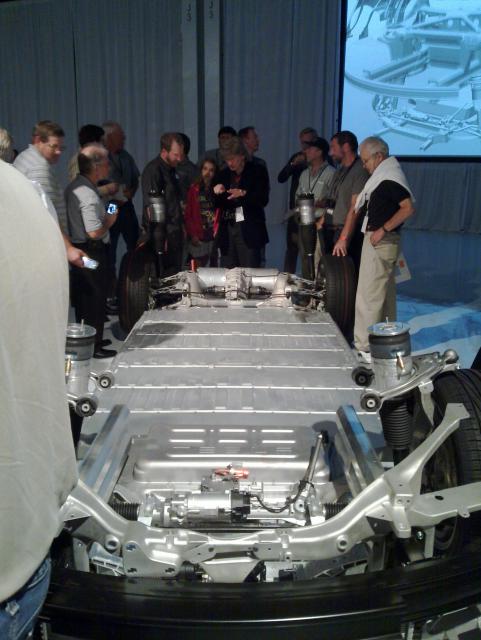 Standing at the chassis I turned around and saw the final assembly, a smooth white factory hall with all these red machines, really in Tesla style! From there one we walked over to the tour check-in, here we got a 90 minute tour around the still work in progress factory. Stamping, painting, plastic moulding and more, really cool to see the birth place of your future piece of modern engineering! 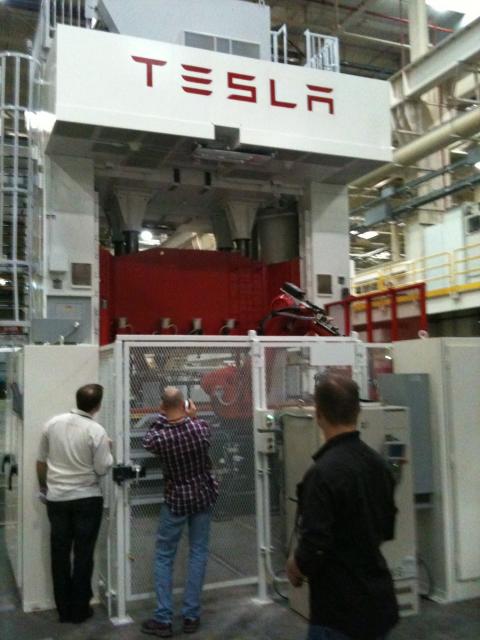 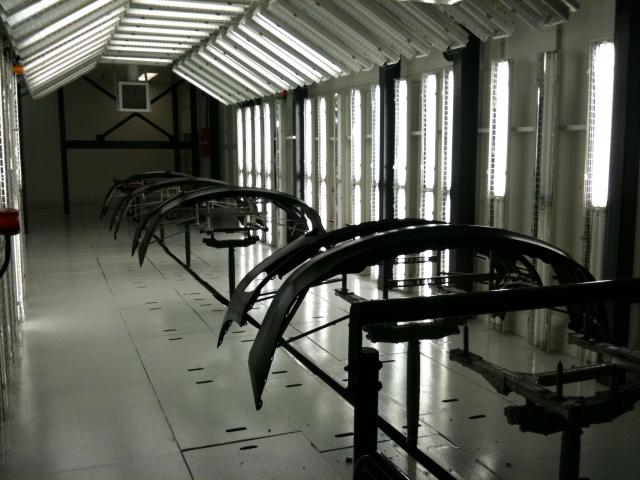 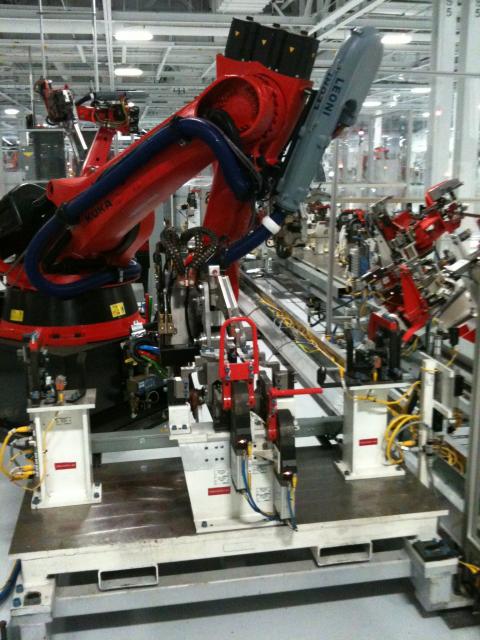 I was so impressed that I sometimes forgot to take pictures! But there are many pictures of this great event floating around on the internet, for example the Picasa album of Ben Goodwin.

Being done with the factory tour it was time for the speech of Elon Musk! He came driving on stage in the red Model S with a total of 8 persons + luggage in it! Have to say, one person was hidden in the “frunk” and in the back jumpseats were two kids!

Elon seemed to be a bit overwhelmed about the presence of so much (about 2.000) future Model S owners. He gave a quick demonstration of the Model S and gave a short talk, which both seemed to be completely improvised and not studied. I liked that, no standard talk, but something that came to mind the moment he was on stage! He even forgot the announcement of the Model S sport! George Blankenship had to call everybody back to get the announcement out. 4.5 sec from 0 – 96 km/h, wauw! 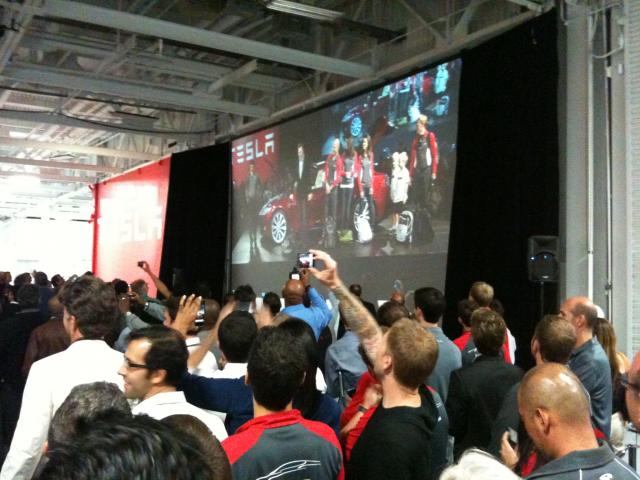 After Elon’s talk it was time to head outside to the area where the rides were being given. We had a slot between 22:00 and 22:30, but it was barely 21:00 at that time, so we had some time to grab a bit, drink a beer and just watch the three S’es driving around. I preferred the white one and that was exactly the on I got my ride in!

Two beers and some chats later it was time for our test drive! I called shotgun on the front seat, but one of the two persons in front of me was Elon’s son, so no need for that. But another car pulled up early, so I eventually got into the middle backseat of the white one. No problem! More than enough space and a great view on the interior and that MASSIVE 17″ central touch screen!

The ride itself was short, to short for me, but I get why. They had only 3 cars and 2.000 attendees to satisfy. I’d like to see it different, but I understand the how and why.

We did a short slalom and a acceleration demonstration on the straight. With 5 persons in the car it didn’t take long to reach 73mph before we had to slow down. No, it’s not as fast as a Roadster, but definitely faster than any other sedan I’ve ever driving! (Which are quite a few descent cars).

After the test-ride we exited the area through a tent where a demo of the central screens functions was being displayed and we saw the new charging connector and “UMC” for the Model S.

Tesla choose to design a new connector which was able to handle both 20kW AC charging as well as 90kW DC charging over the same pins. As a European I asked about the 3-phase support for the Model S and I got a disappointing answer, it’s not present.. I had a (and really good!) discussion with some Tesla employees about this matter. Well, it seemed we disagreed on that. So I started a petition to convince Tesla otherwise.

My final conclusion about the Model S? Full of gadgets, smooth and gorgeous! For me this is how automotive transportation should be. I’ve been hating the in-car systems for the last few years. They always to lacked features and we waaaaaaay behind on what is possible. I’ve driving Audi, Mercedes, BMW and Toyota, but all their systems seemed like they were build in 2000! The Model S however is cutting edge!

I didn’t have the time to play with the system, but from Elon’s demonstration and the other things I saw that night it proofed to me that the Model S will not only be a EV, but it will be my new mobile office! More than enough space, the world at your fingers through the 3G (maybe 4G) connectivity of the car and all that in a luxurious and spacious vehicle.

Of course, there still is work to do for Tesla. But hey, the vehicles were called “betas” for a reason. I work in IT and know what the words “Alpha” and “Beta” mean. As soon as they start using “RC” we can start judging on the finished touches!

The event itself was well prepared and organized. More than enough snack (good ones!) and drinks available and enough Tesla staff to bother will the dozens of questions I had.

I can’t wait any more! I feel like a little kid who wishes at the end of his birthday that he can sleep for a year, so it’s his birthday again the next day 😉

I don’t want to sound like a fanboy (but I guess I do…), but Tesla is really showing some awesome work here. The Model S is simply more than a car, it’s a experience.