SuperCharging in the cold

Last night we stayed in a hotel in Krokom (Sweden) near the SuperCharger. The idea was to fully charge the battery in the morning and then make the 250km trip from Krokom to the SuperCharger in Grong (Norway).

I didn’t know what to expect from the trip, so I really wanted a full battery before attempting this 250km through the cold.

We were at the Krokom SuperCharger at 07:15 and this is what the dashboard showed me: 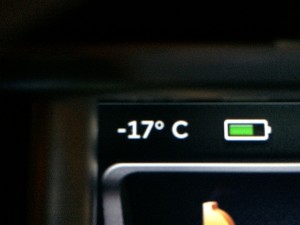 I plugged in with 282km of range left and wanted to charge to 100%, which in my case is 375km of Typical Range (Tesla terminology).

It turned out the battery was so cold due to being outside in -17C the whole night that the SuperCharger would only charge at about 20kW while heating up the battery.

This meant it took 1 hour and 15 minutes to reach 100%. I didn’t expect that. Lesson learned: I should have plugged in at the hotel. All ICEs were plugged in to prevent their engine from freezing. I never expected it to become so cold that night. 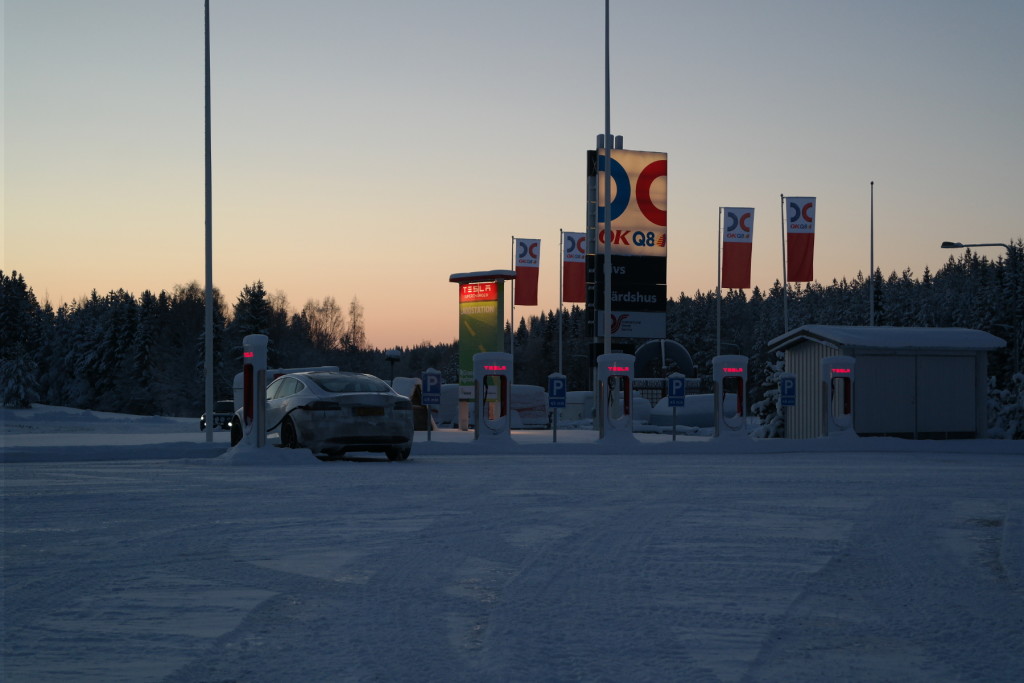 So I got to watch the sun slowly rise above Krokom while the temperature dropped to -19C.

We took the route called Fiskevägen from Krokom (Sweden) to Grong (Norway). This is a fishing route which goes through the mountains from Sweden to Norway. In Sweden it’s route 340 where in Norway it becomes 765 and later turns into the 74.

An amazing route which can’t really be captured on camera. Frozen lakes, snow, more snow and small towns along the road. Oh and deer ofcourse, but those were hard to capture on camera!

The temperature dropped even further, down to -22C. We stopped a couple of times to take some pictures. As soon as you got out of the car you felt the cold hitting you. 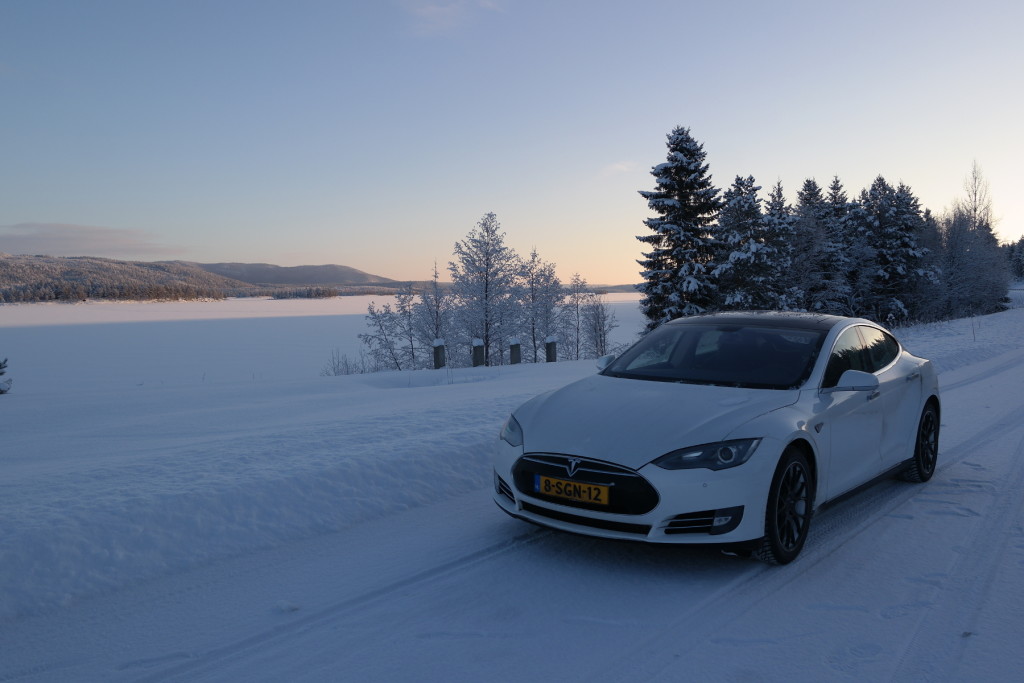 At the Krokom SuperCharger there was also a regular chargingpoint which I tried. It worked without any RFID card. I plugged in and my car started charging at 22kW (3x32A Type 2). 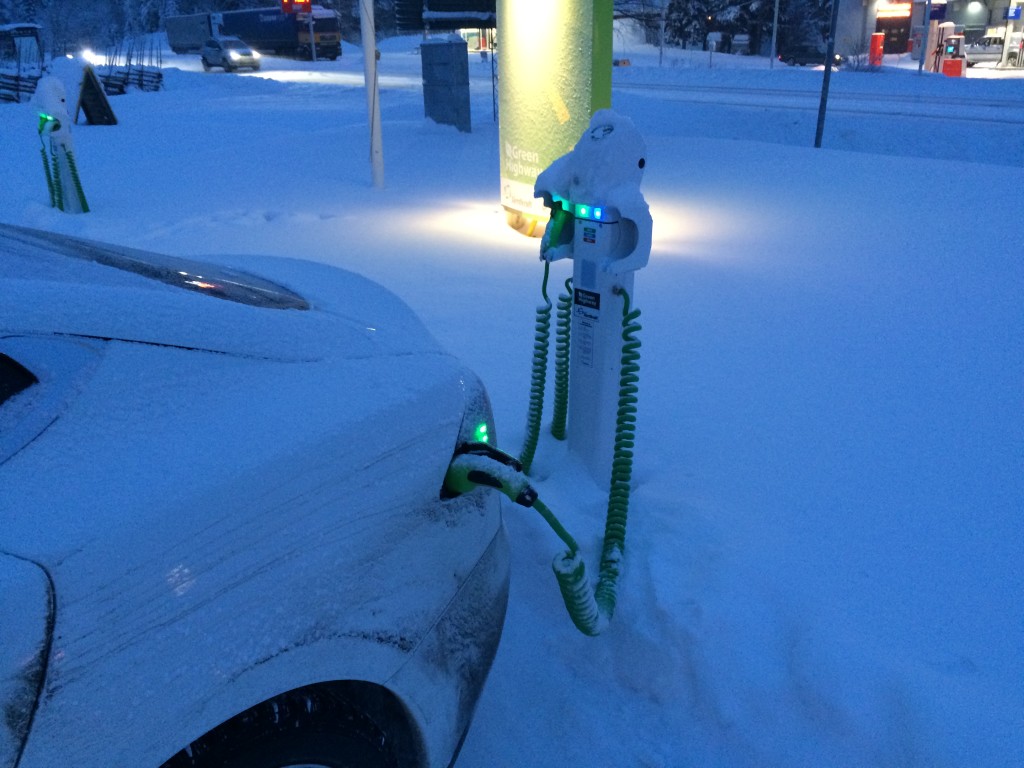 I found out that it was from the Green Highway. Looking at the map I saw that there also was a charging point in Rötviken, a place along route 340.

It was 95km from Krokom, so I figured it was a good place to stop, drink and eat something while we charged a bit at 22kW. Well, I turned out differently! I found the charger, but it was only 3.6kW (1x16A Type 2). Dead slow, really unusable in -20C. Being idle with the heater on a Model S consumes more then 3.6kW, so just being there drowned more energy from the battery then the charger could add. 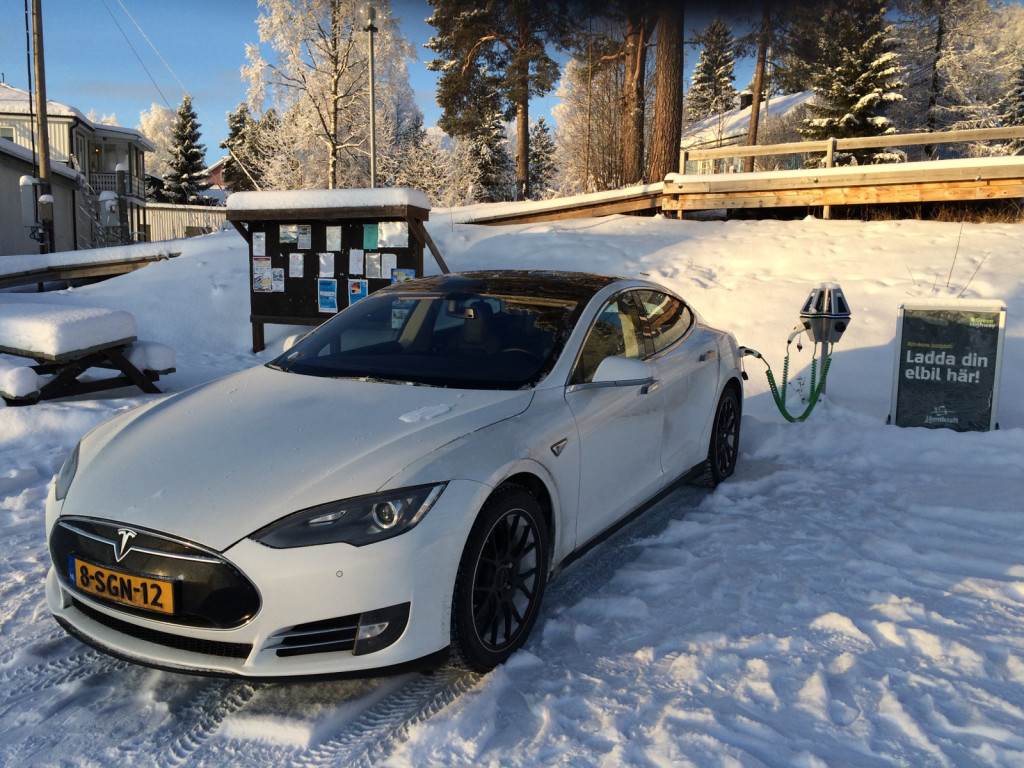 This project has been realized with money from the European Union. I really wonder who thought it was a good idea to put up a 3.6kW charger. That takes 30 hours to fully charge a Tesla Model S with a 85kWh battery!

We continued via Fiskevägen (Route 340) and entered Norway: 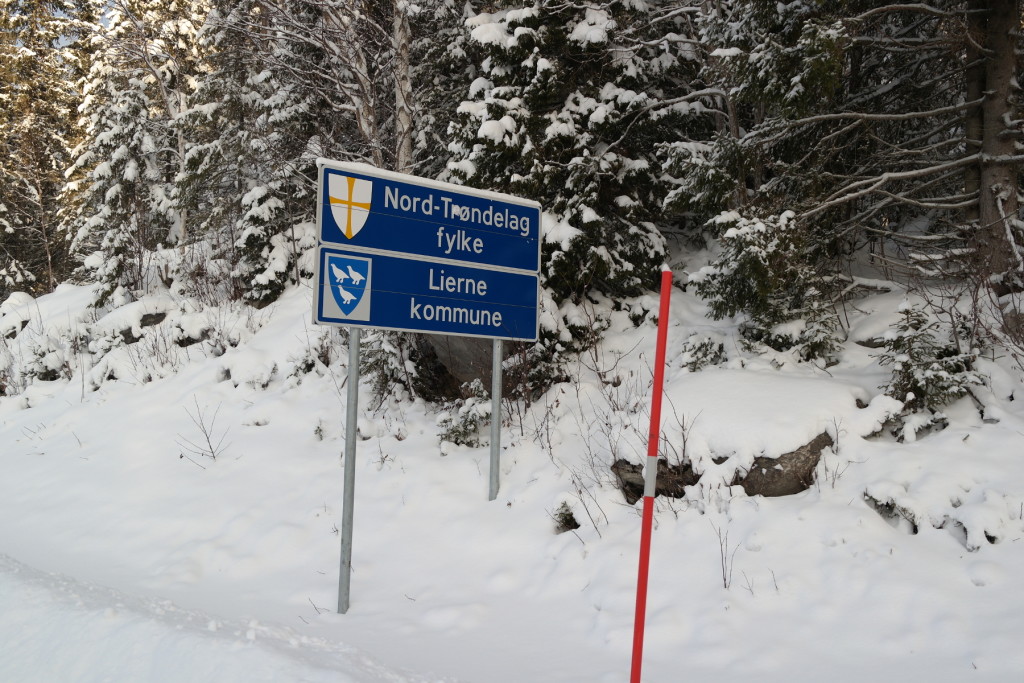 The scenery kept continuing and we also kept climbing until we got above the treeline on route 74: 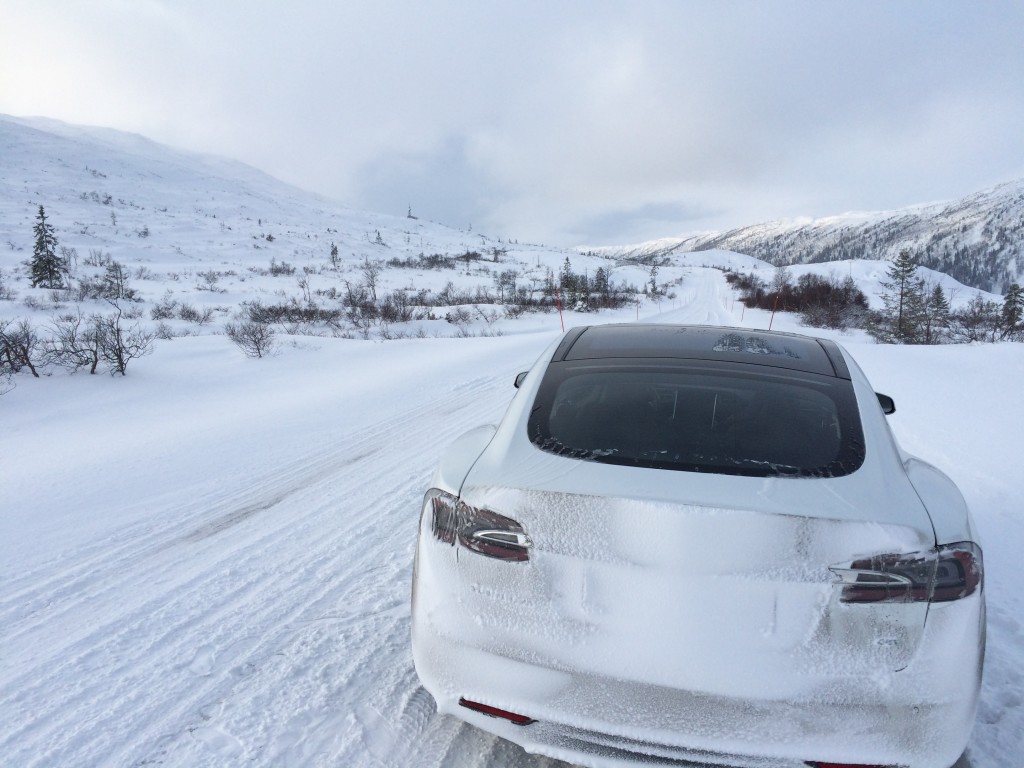 Fresh snow and a spectacular view! It was time to take a selfie: 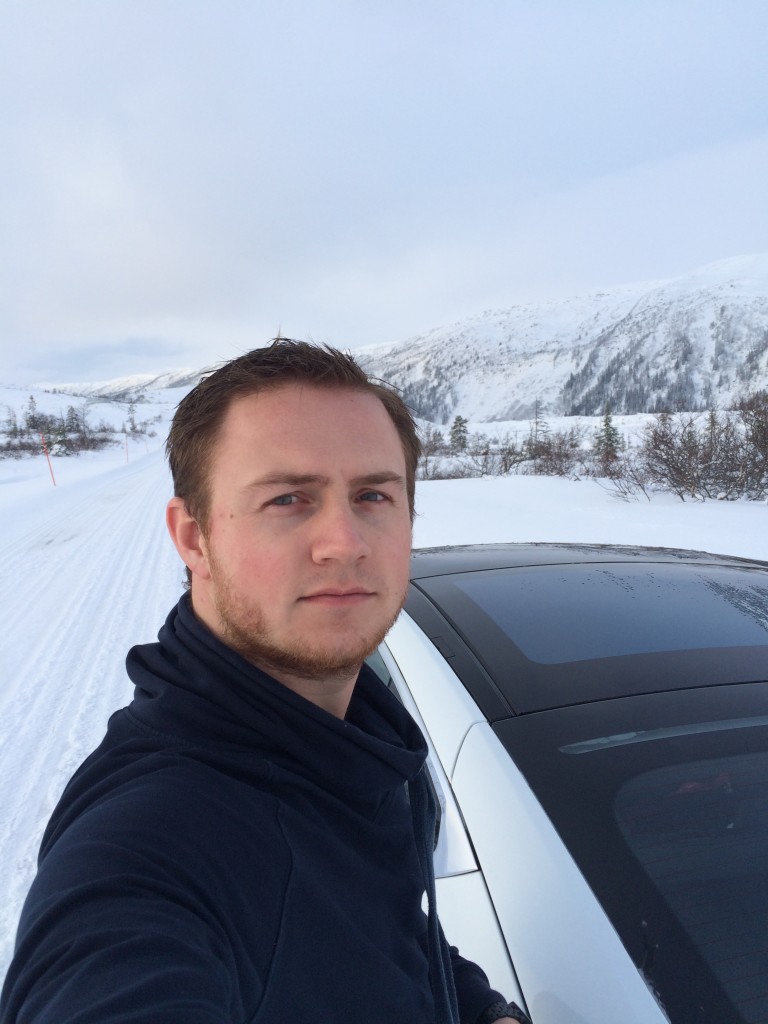 From this mountain pass we started to descend again and finally reach Grong in Norway. The SuperCharger there was covered in snow, so we couldn’t park easily. 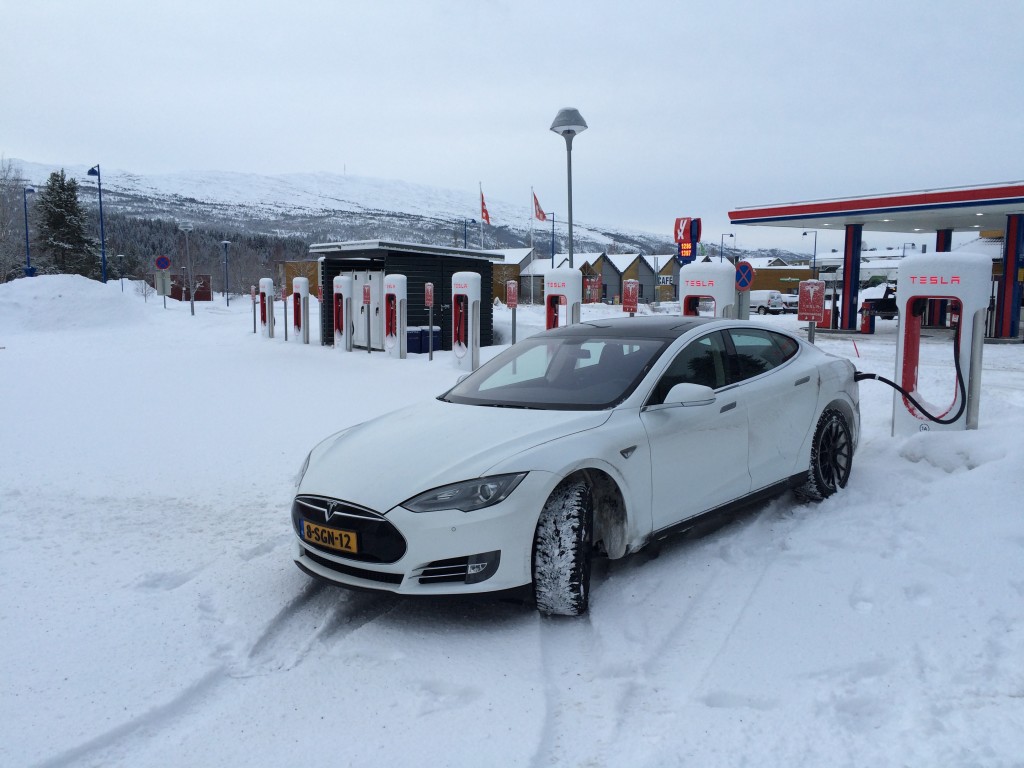 At the SuperCharger it was -3C, a lot less colder then in Sweden.

After charging in Grong we headed towards Mosjøen where we are spending the night.

I must be honest, I got some range anxiety when I saw it was -17C in Krokom and knew we had to travel 250km through mountains without any charging options.

From Rötviken we started to ascend, so our consumption went up towards 280Wh/km, that got me a bit worried. Later on however we started to descend and even started to charge the battery again due to the regenerative braking of the Model S. I saw the battery indicator going up, instead of going down!

It was really the unknown which got me. 250km through -20C and no charging options available, but I quickly saw that we were going to reach Grong without any problems.

If you own a Model S and want to visit Sweden and Norway I really recommend that you drive Fiskevägen. What an amazing route!

In the past two days we visited Stockholm and continued our journey towards Norway.

Nothing really special actually. It started snowing and the temperatures started to drop, it’s -11 Celcius right now and snow is still falling.

Tomorrow we are going to drive from Krokum to the Grong SuperCharger in Norway. This is a 250km trip via what it seems some very small towns.

It looks like we have to cross mountains as well, so we’ll do a 100% charge at the Krokum SuperCharger before heading to Grong in Norway.

250km should be doable under the worst conditions possible with a full battery, so it’s looking good. We’ll be in Norway tomorrow!

I’m keeping a detailed spreadsheet with the energy consumption during the trip and we are currently at 225Wh/km over 2200km. That is really not bad, I expected higher consumption.