The biggest issue with Electric Vehicles (EV’s) is charging. How do I charge my car within a reasonable time frame? Charging within 1 hour is possible, but you need a lot of power to do so. That is not available on all locations and requires special chargers.

Almost two years ago I made a reservation for a Tesla Model S, the car which I think is the best EV to come to the market.

In the summer of 2011 I was invited to a ‘reservation holder only event‘ at the Tesla factory in Fremont California. I went there and saw the Model S for the first time: Wow…. I was blown away, what a beauty.

EV’s however are new and not everything is technically the way you want it to be.

What is 3-phase charging and why would you want it?

Timely charging is the biggest issue with EV’s. With 3-phase charging you could charge your EV 3 times faster, since Europe has a 3-phase power grid.

I live in Europe (The Netherlands) and  unlike the USA were are limited to ~32A per phase. In the USA you can get a 100 Amp installation in your house. Amps and Volts is all that counts when you want to charge an EV.

When I made my reservation the Tesla website stated that the Model S could charge from 110V, 220V and 480V. From that moment I assumed the Model S would support 3-phase charging, but then I went to the event at the factory in Fremont. 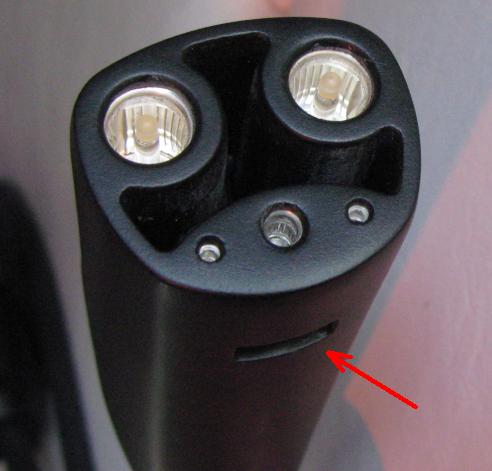 This picture shows the new charging connector of the Model S. Tesla designed a new connector which could handle AC (low to medium (20kW)) power and DC (high >50kW)) power over the same pin layout. This results in a very sleek connector. A great connector if you look at it from a designers perspective.

The connector is however lacking a 2nd and 3rd connector for 3-phase charging. This connector design only has:

In order to support 3-phase power the connector should have two more ‘big’ connectors.

I asked a Tesla employee if the Model S could charge from 3-phases and he said “No, it won’t” I felt really disappointed. I had been waiting on the Model S for such a long time already (18 months), living with the assumption (since the website stated 480V charging) that it would support 3-phase charging.

The employee told me that Tesla focused on Quick/Fast/Super-charging a Model S with high power DC (500V, ~200A, 90kW, 45 min) instead of the slower charging. The Model S would also be able to travel such long distances that you could do almost all your driving without charging. I argued he was wrong, but it was quite busy at the event, so I didn’t get into a in-depth discussion with him.

Although the event at the Tesla factory was great, the news about the lack of 3-phase charging gave a real bad taste.

In the car back to the hotel I started brainstorming with my colleague (the Roadster owner) about how we could convince Tesla otherwise. As a Roadster owner in Europe he’s also quite disappointed about the Roadsters limitation to 7kW (32A @ 230V) charging (8 hours) in Europe. He however accepted it since the Roadster is a car for pioneers, early adopters or tech freaks, however you want to call them.

If you by a base Model S you get one on-board 10kW AC charger, but if you pay $1500,00 you get a second 10kW charger which runs parallel with the first charger, giving you 20kW AC charging.

Wait a minute? 20kW AC charging? That is exactly what we want in Europe! In the US the chargers run parallel on 1-phase, as Europeans we want the 20kW spread out over 3-phases. So what is the point? Tesla clearly sees that 20kW AC charging is useful in the US, why not in Europe? 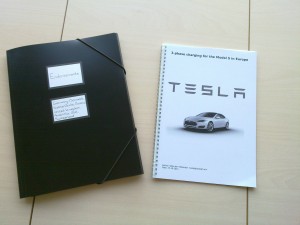 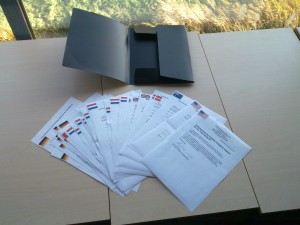 On the right two pictures of how this looked.

On November 4th 2011 I sent this package to the Tesla HQ in Palo Alto, CA, USA and I started waiting…

After a month of waiting for just a “Thank you for your letter” I also sent the letter to the Tesla EU HQ in London and posted a Tweet. That is when I got a “Thank you” from Tesla, but nothing conclusive. I never expected Tesla to reply within a month with a answer that they would or wouldn’t support 3-phase charging.

I completely understand that such decisions might have a big impact and involve a lot of people, so these kind of things take time.

However, is implementing 3-phase support that hard? I think it’s not. The biggest obstacle I think is the connector (see above) that Tesla designed. It’s missing the necessary connections for L2 (2nd phase) and L3 (3rd phase), so they would have to redesign that connector. They could also add a second charging port on the car and support the IEC 62192-2-2 connector natively without any adapters?

3-phase charging would drastically improve the usage of the Model S. On a 3x16A (10kW) connection you could charge a Model S with it’s 85kWh battery in about 8 hours. A Nissan Leaf also charges in 8 hours, but a full charge of a Leaf gets you 160km, a full Model S takes you up to 480km.

I made a graph to display the various charging times for a Model S and a Roadster. You get the picture why 3-phase charging is really needed for the Model S!

Without 3-phase charging you wouldn’t even be able to charge your Model S overnight! How are you supposed to charge the Model S if you get back home later in the evening and want to leave the next morning? A full charge could take over 24 hours!

Most (bigger) hotels in Europe also have a 3-phase connection available somewhere in the parking lot, if not, it is trivial to get such a connection installed. With just a single-phase socket you can’t charge your Model S overnight (see the chart above).

The faster you can charge your EV, the better. It makes the car more practical, simple as that.

The final decision is at Tesla, but I think that supporting 3-phase charging is trivial and vital for Tesla if they want to be successful in Europe. In my letter to Tesla I showed them how many 3-phase charging stations are available in Europe. The current estimate is that over 2.500 (~1300 in Holland alone!) of these charging stations are installed in Northern Europe and they are being installed on a daily basis. (Amsterdam is installing at least one every week).

We just saw the release of the Pricing & Options of the US Model S, so I’m not expecting a answer from Tesla really soon. I however have good hope that Tesla will implement 3-phase charging for the Model S. My hope is that they will reveal it at the Geneva Motor Show in March 2012. 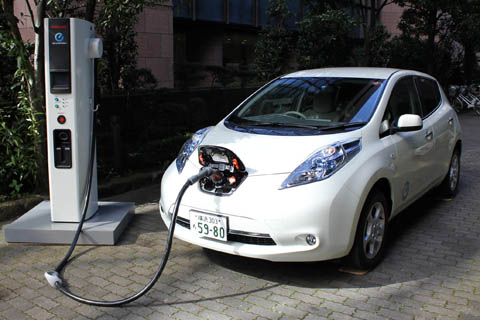 Something else which has been bothering me is the DC (fast-charging) charging Tesla will be using for the Model S. They say it will be DC charging at 500V and can top up your Model S in 45 minutes. They call it “Supercharging”.

Around the world (especially in Europe and Japan) fast-chargers are being installed which are compliant to the CHAdeMO protocol.

CHAdeMO is a fast-charge protocol which delivers up to 50kW of power. If we take a look again at the calculations above: 85kWh / 50kW = 1.7 hours for a full charge.

The Nissan Leaf is one of the first cars to support CHAdeMO fast-charging. A CHAdeMO station can recharge the 24kWh battery of a Leaf in 30 minutes.

Yes, the 50kW a CHAdeMO charger delivers is 60% of the 90kW Tesla is intending to use, but still, 50kW is better then nothing.

Tesla claims that they will be installing their “Super chargers” throughout the US and even Europe, concrete plans are however lacking.

The CHAdeMO chargers are being rolled out today. Nissan recently said that they will donate 400 chargers in Europe. 400 chargers!? That is great! If the Model S could take advantage of these chargers you could travel even further.

CHAdeMO seems to be winning in Europe and Japan as it comes to fast-charging. I’m not sure about the US, but it seems it’s getting traction there as well. In 2012 there will be hundreds or more then a thousand of these chargers throughout Europe. It would be a shame if the Model S can’t charge there.

My message to Tesla is that they should make the Model S the best EV on the planet and crush all competition. I’m blown away by the Model S and can’t wait to receive mine. It would however be a shame if the car would be limiting me by not letting me take advantage of the available power provided by 3-phase and CHAdeMO charging stations.

The specifications of the Model S are great, no doubt about that. Just make sure that I as a driver can take full advantage of all the charging possibilities which are available. That would make me (and I think a lot with me) a very, very, very happy customer!