Last Saturday we left at 08:00 from Middelburg for the 1.100km drive to Hirtshals, Denmark. From there we would take the ferry to Larvik, Norway on Sunday morning.

It took us 14 hours to reach Hirtshals. Traffic was bad, very bad starting at Hamburg towards the border. Roadworks and border controls made it stop and go over almost 100km!

A short night followed since our ferry left at 08:00.

After arriving in Larvik our first SuperCharger in Norway was Lier South, 100km from Larvik.

It was busy! After we parked all 8 stalls are occupied. Other Model S had to wait in the queue. 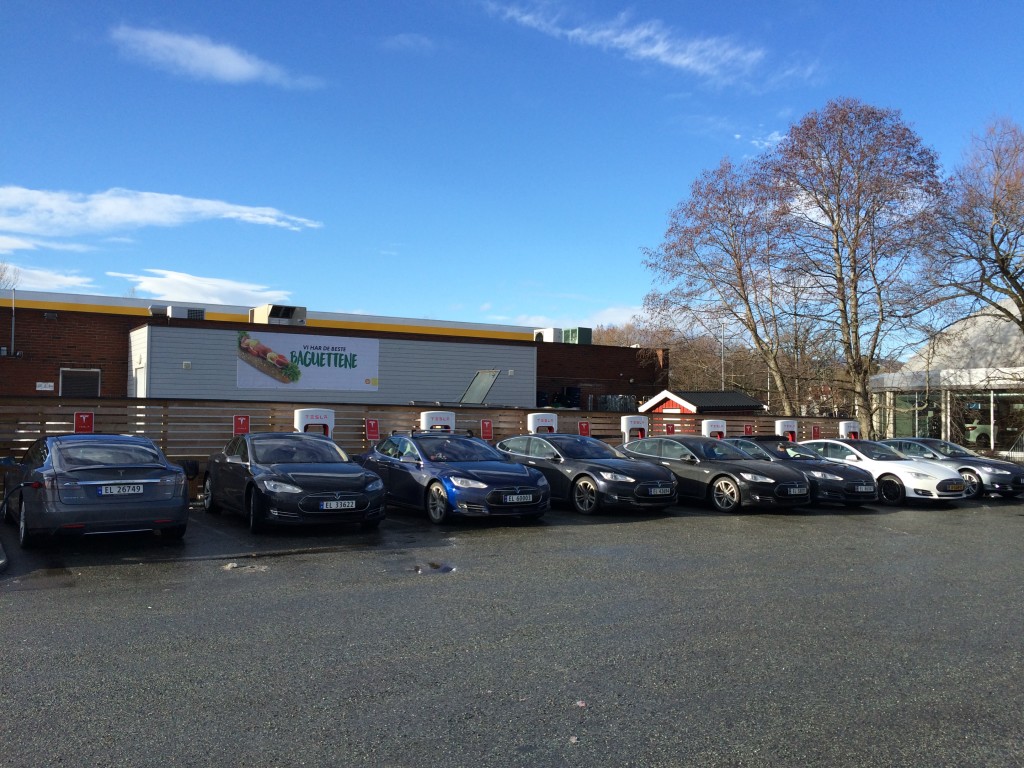 A queue is bad, but it also shows that the infrastructure is used! It’s not a charger which is rarely used. From what I understood it was also a vacation period, so that might have caused the spike in traffic.

After charging in Lier we headed to Lillehammer. We would stay the night there and charge again.

While heading to Lillehammer I stopped at a CHAdeMO from Fortum to see if I could charge there. The people from Fortum told me that I could use my Dutch phone and send a SMS to active it.

Well, that didn’t work. I borrowed a RFID tag from somebody else as a backup. On the Lofoten Islands I will need to use a Fortum charger, so I wanted to know if it worked. Lesson learned. It doesn’t. 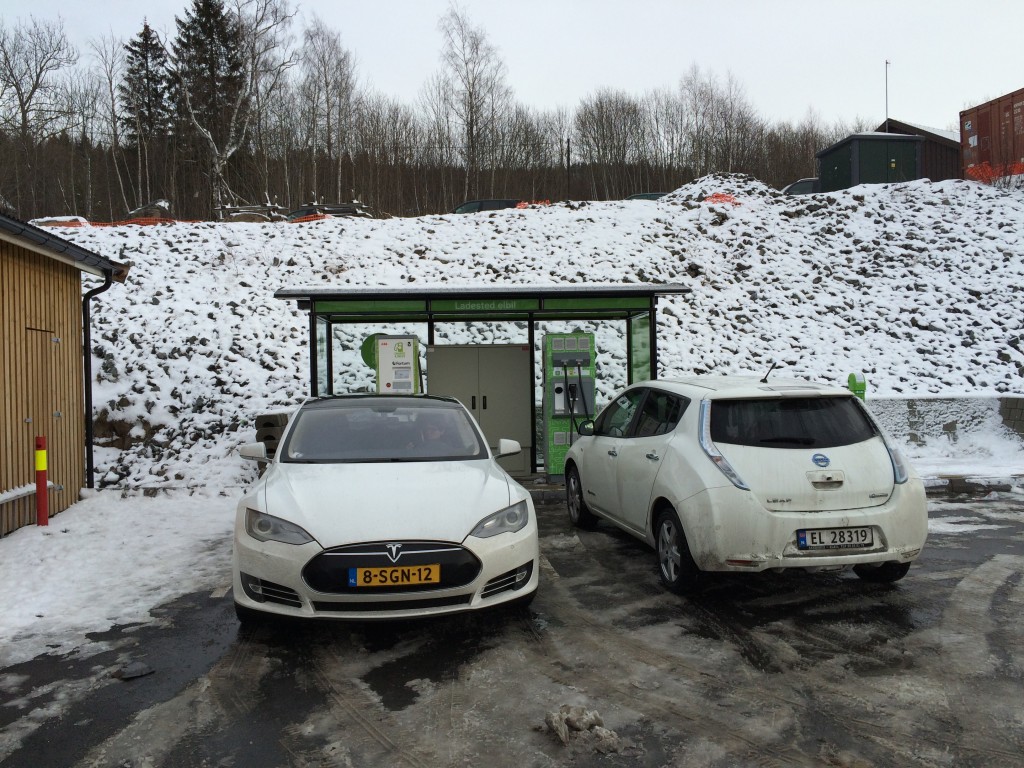 On the E6 to Lillehammer we already spotted a lot of Model S coming from Lillehammer, so I expected the SuperCharger to be crowded.

It was! 9 of the 10 stalls we busy, so we parked at the last stall available.

As we were charging we saw more Model S arrive. We still had 100km left in the battery and we would leave the next morning. We vacated the stall and to decided to charge the next morning for the 155km drive to Dombas and Trondheim.

We checked in at the hotel and went for a dinner in Lillehammer.

SuperCharging with a cold battery

The next morning the car had been in -8C for the night. When I switched to ‘Drive’ a warning indicated that regenerative braking had been disabled. This was due to the battery being cold.

SuperCharging didn’t go very fast. When I just started it would charge with 17kW and slowly climbed to roughly 30kW before we had enough to leave for Dombas.

This was a similar experience as last year at the Krokom SuperCharger in -22C.

The picture below shows that we were charging with 24kW where under normal conditions it should have been about 80kW. 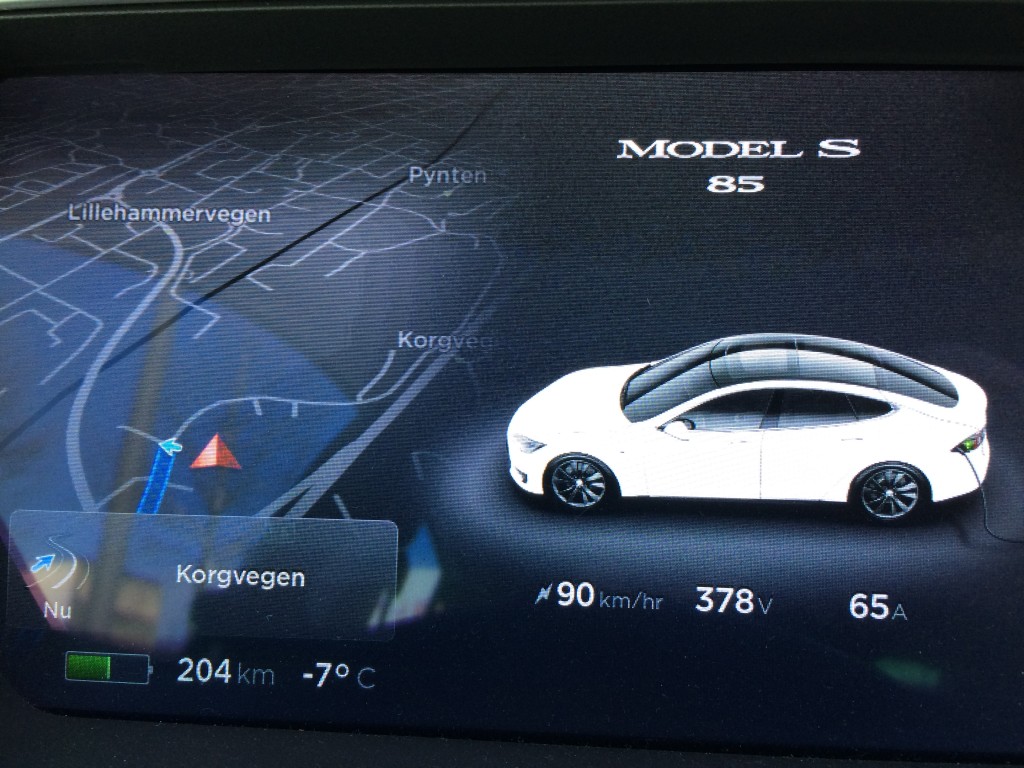 From Lillehammer we drove to the Dombas SuperCharger. After a charge and lunch there we headed down to Klett (near Trondheim).

Nothing really special on this part of the trip. The temperature was about -5C and the (road) conditions were good.

Our destination is a house we rented through Airbnb on the Lofoten Islands.

From Trondheim we are taking the Hurtigruten ferry to Stamsund on the Lofoten. This will take 2 days.

From Stamsund to the house it is just 21km. Time to relax!