I play paintball as a sport/hobby and this weekend there is a event in Wales which I’m going to attend.

As a Model S owner I obviously wanted to go there with my Tesla Model S, but it’s a 800km single-trip, so I needed to charge somewhere. After some searching I found the Ecotricity network in the UK. A network with 50kW chargers along most of the main Motorways in the UK.

The ecotricity chargers have a 50kW CHAdeMO connector (DC) and a 43kW Type 2 (AC) connector. Since Tesla hasn’t released their CHAdeMO adapter yet I’ll have to charge using the AC connector. The onboard chargers of the Model S are capable of 3x32A (22kW), but they are temporarily limited to 3x26A (18kW). So we could have charged with 50kW instead of 18kW if we had the adapter already.

This morning I left my home in Middelburg and headed to the Calais (France) for the ferry crossing to the UK. 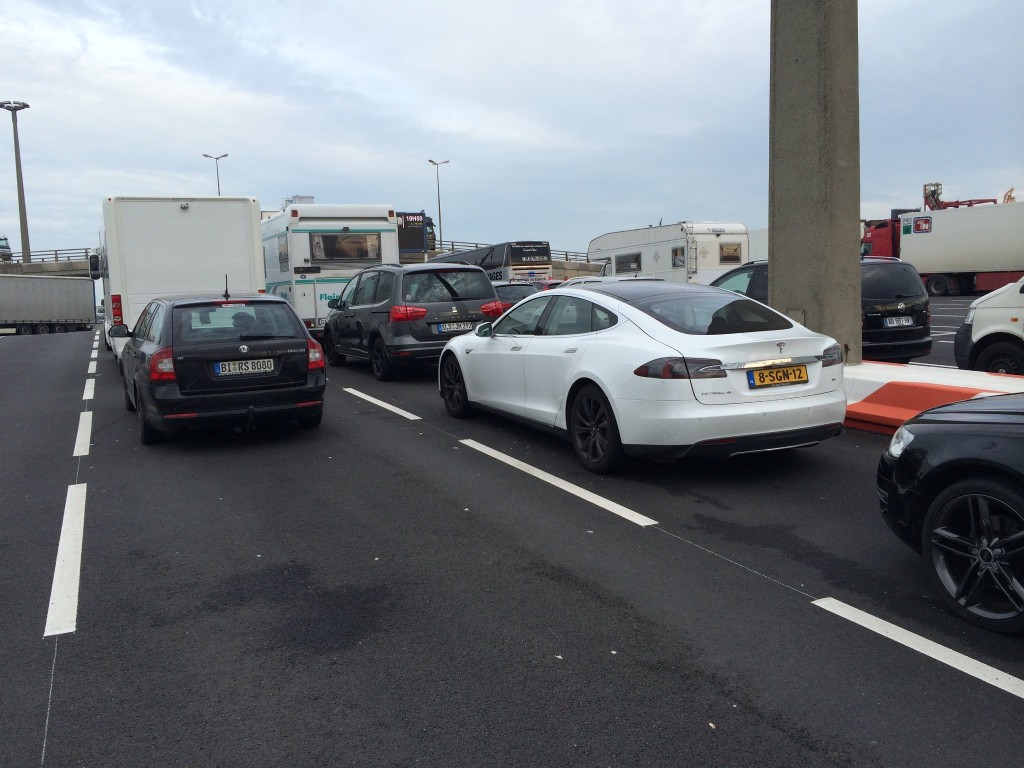 The first stop was at Calais. No charging facilities there. Thus far we (driving with a friend of mine) had driven 217km with a total usage of 47.3kWh. That comes down to 217Wh/km. It was quite windy and cold (5C) this morning, so that explains the higher usage. We continuesly drove with a speed of 100km/h. 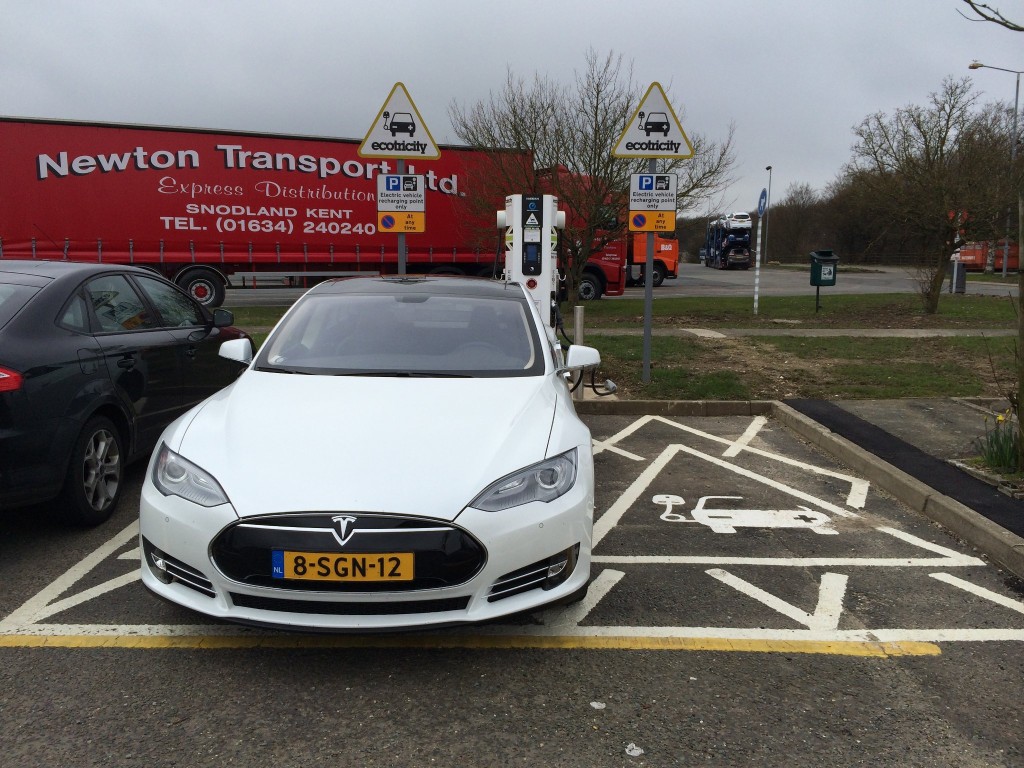 There we are, charging at the Ecotricity charger! Worked just fine. Hit the buttons, swipe the card, choose AC and plug it in! 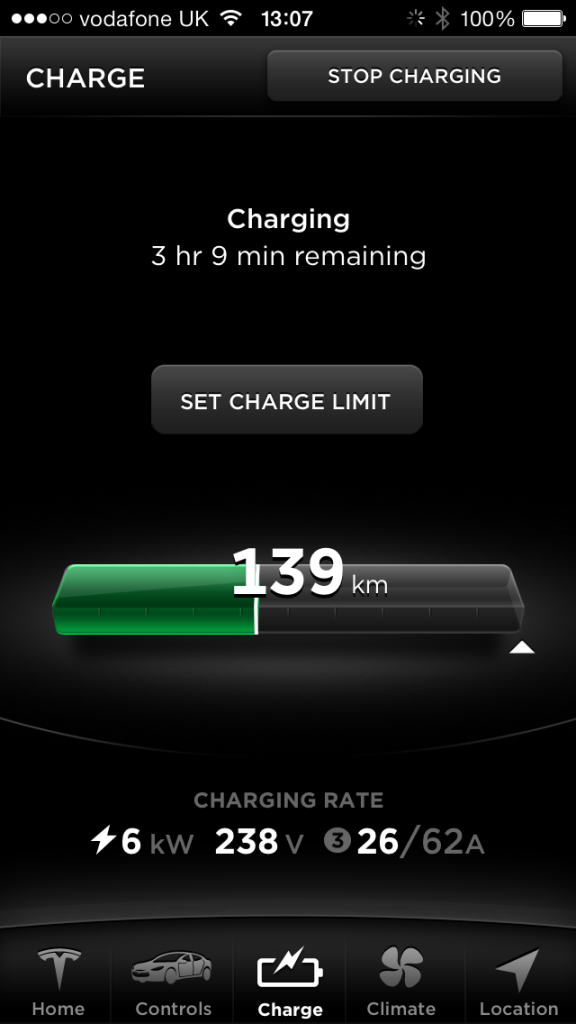 As you can see, the chargers goes up to 62A, but it’s the Model S which is limited to 26A right now.

The next charging station is underneath a Windmill near Reading. Just 160km from here. So a bit more charging and we are on our way!

Towards the Windmill
After a charge it was time to head to the Green Business Park in Reading for a charge underneath a windmill.

The charging station wasn’t hard to find, simply look for the windmill. There was a Nissean Leaf already charging, but the station has two outlets, so we could plug in and charge. 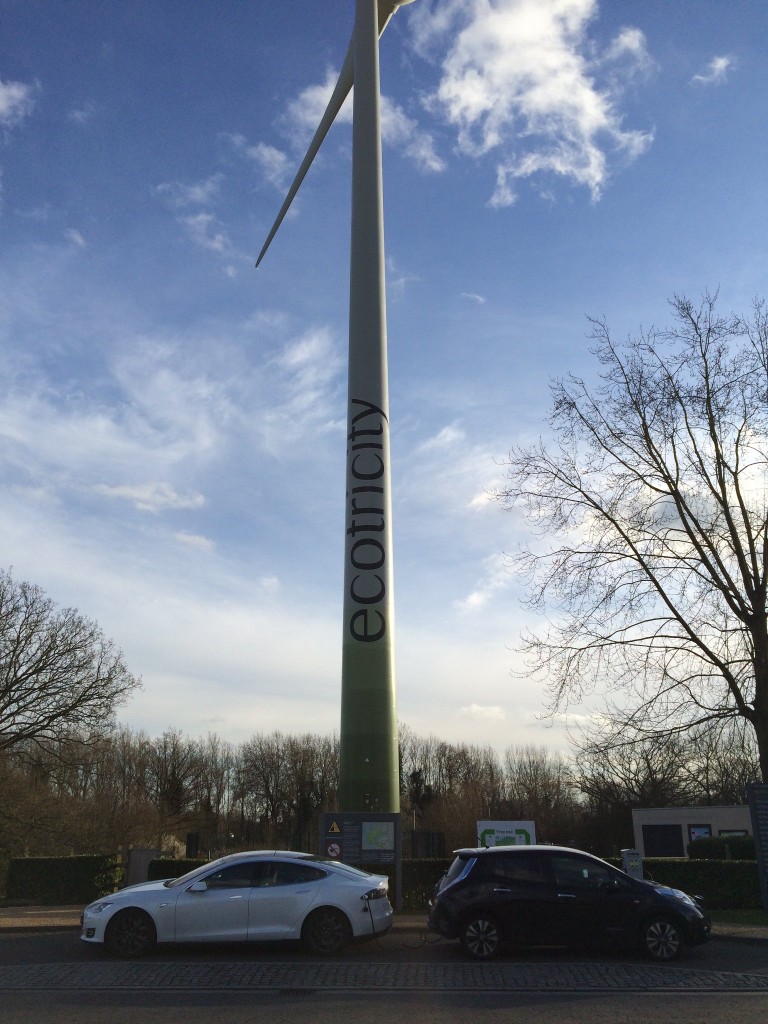 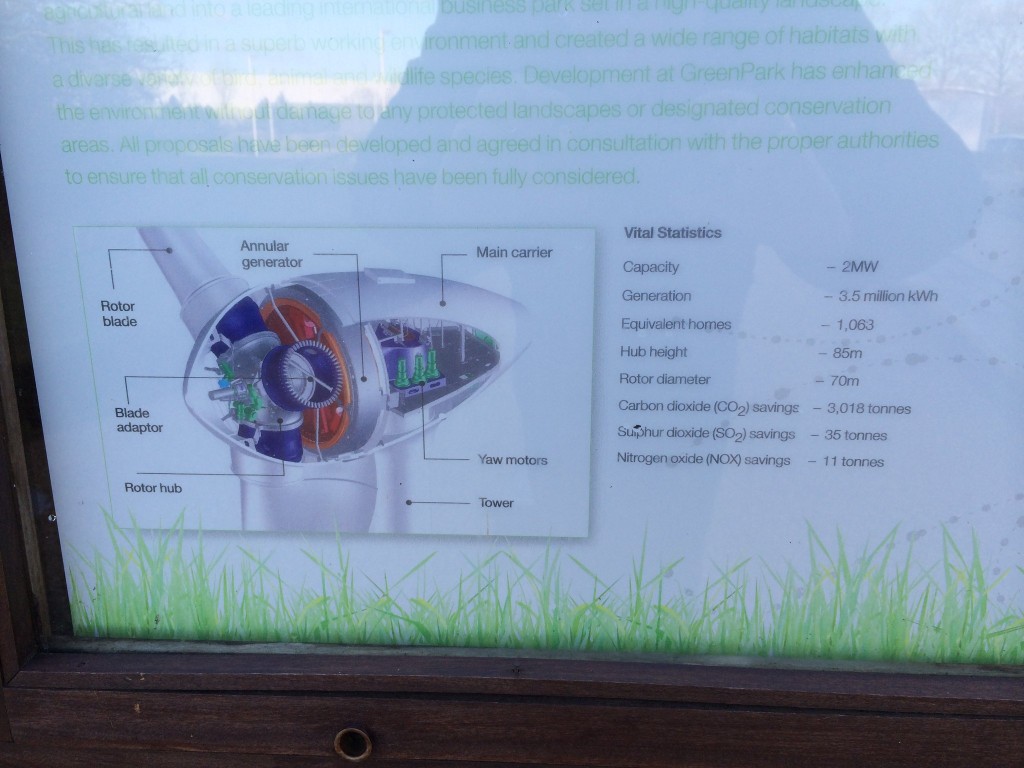 2MW is a huge amount of power, should be enough to give me a full charge 🙂

We stayed here for about 30 minutes. Besides the park there isn’t that much to do at the windmill, so we left towards the next services area to get dinner and a longer charge.

At the next service area we still had 160km or range left.

We’re taking a defensive strategy this trip, we don’t want to run low on power, so we do multiple shorter charges instead of 2 long ones. You never know what happens during the trip! 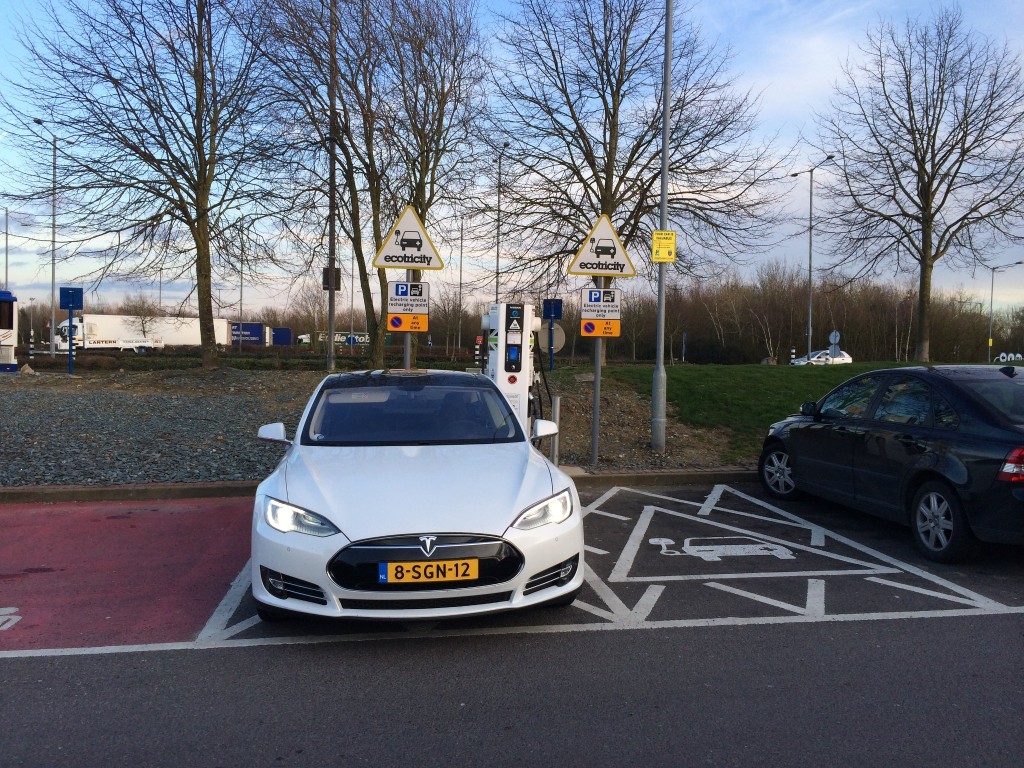 The voltage is 247V. So with 3x26A we are looking at a 19.2kW charge! The more kiloWatts that go into the car, the shorter the charge is.

Made it to Wales
A day late I’m writing to be able to tell you I made it to Wales! We charged 73km before our destination to 200km of range so we got at the location with enough charge.

We weren’t sure if we could charge at the Bluestone Park Wales, but they allowed us to plug into a 13A socket which was enough to fully charge the car in 15 hours. We are full again and can begin our trip back to the Netherlands on Monday.

Heading back to Dover
On Sunday evening we left Wales to drive 140km to our first Ecotricity charger to get something to eat and a short charge.

After some “diner” at the Burger King we headed down the M4 for a overnight stay in the Travelodge motel in Chieveley which also has a Ecotricity charger.

We fully charged the car and had a good night of sleep. Got up again at 07:00 and at 08:00 we were on our way again to our last charger before the ferry at Dover.

After this it’s just 280km to our home, so no more need for charging.

Last stretch home
From the last charging station at the M2 it was another 290km to get home. We charged the battery to about 320km before leaving for the ferry.

In Calais it was quite windy, so our energy consumption went up pretty steep. In the end we reached Middelburg with just 17km left in the battery.

Trip log
I kept a full log of the trip and energy consumption which is available here.

The Ecotricity network
One word: Awesome!

I seriously love it that they are solving the chicken-egg problem by simply putting those chargers out there now. The charging is for free right now, but I would have paid if required.

If this network keeps expanding and Tesla delivers the CHAdeMO adapter it will only get better! My next visit to the UK will probably be fully electric again thanks to Ecotricity!

In the end this is what my Model S shows on his charging map: 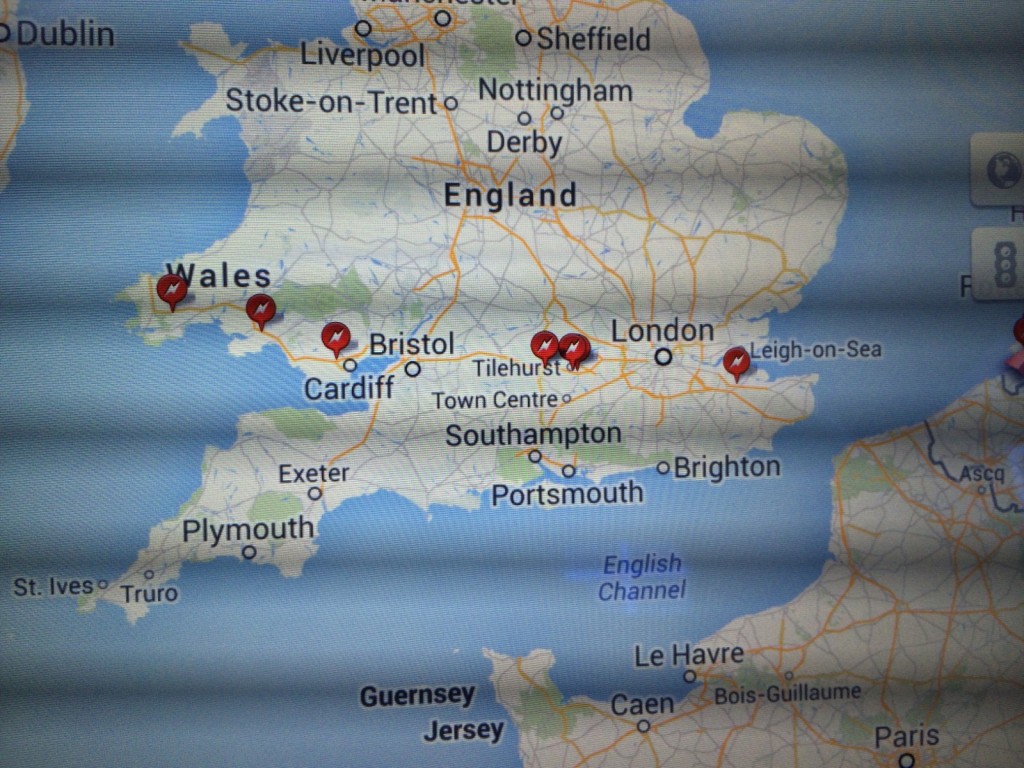